The Exquisite Corpses of "Six Feet Under" 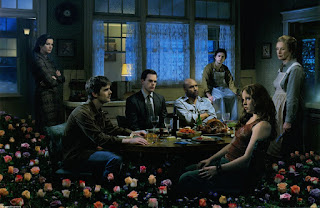 If you'd asked me what I thought of Six Feet Under last year, I would have shrugged noncommittally. Something about HBO's funeral-parlor series bugged me—the way it seemed so damn proud of its eccentricity and broodiness, even while it resuscitated cheesy gimmicks like talking ghosts, best left to melodramas like Providence and Sisters, and compulsively unleashed soap opera plots (psycho-killer brother, illegitimate baby, etc.). I never got attached enough to these remote, pent-up characters, though I loved Brenda's exquisitely nihilistic sex spree last season (culminating in her ménage à trois with a couple of teenage surfer boys), and I was secretly thrilled by the gradual cracking of Nate's saintly veneer and the prospect of his impending doom via brain surgery.

All my reservations vanished as I watched the first half of the new season—Six Feet Under has been transformed into TV's most visually ravishing experience. (The first three episodes will be rebroadcast together on March 22 if you missed them.) It has achieved a vibe redolent of contemporary photographers like Gregory Crewdson and Philip-Lorca DiCorcia, who create dramatic, magical tableaux out of humdrum, real-life moments. As if to confirm this connection, producer Alan Ball hired Crewdson to shoot the promotional photo for this season, an eerie image of the cast sitting around the kitchen table, the floor engulfed by flowers. Ball told the New York Post, "[Crewdson's] works seems to be about the sort of secret, surreal life that exists just beneath the surface of mundane surroundings—and that's very much what our show is about."

Six Feet Under has been delivering its own startling tableaux in regular doses: A highly strung Hollywood producer hides inside a white cocoon she's made with her Fratesi sheets; frumpy family matriarch Ruth (Frances Conroy) sits alone on a giant, oversized bench, her legs dangling down like a toddler's; strapping ex-cop Keith (Mathew St. Patrick), now demoted to security guard, fishes a dead dog out of a Hockney-esque swimming pool.

And of course the whole season starts out with the ultimate existential montage. Nate (Peter Krause) hallucinates alternate realities during his cranial surgery, visions that include a serene moment with new-agey girlfriend Lisa (Lili Taylor) and their baby Maya; a more boisterous vision of himself with his ex, Brenda (Rachel Griffiths); and a glimpse of a world in which Nate never existed at all. Although he emerges from the surgery without brain damage, he moves through the series with the glazed look of a man wading through honey. Everything in subsequent episodes seems to radiate out from Nate's near-death experience; instances of déjà vu are scattered all over the place. This lends the show a gentle, hazy pace—a marked improvement on the forced edginess that sometimes afflicted it in seasons past.

Director of photography Alan Caso, who has shaped Six Feet Under's visual sensibility from the beginning, says he deliberately avoids what he calls "the kinetic, almost chaotic movement style of network TV—you know, the NYPD Blue thing. We don't move the camera a lot unless there's a reason to move it, motivated by the emotional intent of the scene. We do a lot of very formal shots where you let things play out on a proscenium, treating the frame almost like it's a stage."

Caso admits that the show's look changed a lot this season—the crew switched to a wide-screen format that evokes a more cinematic feel, and he's made the lighting moodier. "I feel like we're always in a bat cave. We're in their environment and the rest of the world is always trying to invade, but never really gets into all the dark corners of the Fisher house. Every character on the show is so messed up that the lighting really works with them—there are so many dark areas in their psyches."

He says the main component of "the Six Feet Under look" is the wide lens, which rarely gets used on television. "It gives us a much more in-your-face style than traditional television. Have you ever talked to somebody at a party and they stand a little too close? It's a very creepy, uncomfortable feeling, and that's what we've been doing, putting the audience in the shoes of someone who stands too close, so you feel you've invaded the characters' space."

Although it's set in L.A., you won't see many tan lines or tube tops. A lot of scenes take place inside the family's cloistered kitchen, with its flocked wallpaper and cluttered cupboards, or in the white-tiled embalming room. Yet the show is drenched in indirect light; sunshine pounds so hard on the kitchen windows they ought to break, and it slices through the vertical blinds of the shrink's office where David (Michael C. Hall) and Keith are undergoing a humorous bout of couple's therapy. Now that he's out of the closet, David is venting emotions like crazy. ("I feel shamed," he announces when Keith snaps at him for adding too much pepper to the bok choy.) In Six Feet Under, Californian expressiveness doesn't necessarily lead to happiness, though: Brenda's let-it-all-hang-out psychiatrist parents thoroughly screwed her up, and Ruth's flirtation with a cultish program called "the Plan" left her more estranged from the world than ever.

Even if it didn't have anything else going for it, Six Feet Under has the juiciest, most complex female roles on TV. And unlike Sex in the City's femmes, these women don't have to swap outfits with every scene—Ruth wore identical ankle socks for two years straight. This season, two of the female characters come into spectacular relief—in both senses of the word. While Nate and David appear faded and anxious, unable to find their bearings, redheaded mother-daughter duo Ruth and Claire (Lauren Ambrose) spring to life. No longer do they look like wax dummies left out in the heat too long; now both women glow euphorically, each with the help of an accomplice. In Ruth's case, the angel sent to mess with her coupon-clipping life is Bettina (Kathy Bates), a friend who introduces her to the pleasures of massage and shoplifting. During Ruth's first-ever massage, she makes gasping and squeaking noises as if pleasure is being forced out of her body—one of the series' most grotesque and affecting moments thus far.

Meanwhile, Claire is having a parallel epiphany at art school, as her creepy Eurotrash professor and a gorgeously geeky fellow student shower her with adoration (whether for her talent or her body remains to be seen). You can understand why: Her skin is absurdly luminous and her features in constant motion, clashing thoughts skittering across them. Aside from giving her a chance to blossom, Claire's enrollment in art school allows the writers to weave the show's obsession with light and painterliness into the plot itself.

Although the Fisher family continues to deal with corpses in every episode, death has become the subtlest element ofSix Feet Under—a constant, unremarked presence. The real theme of the series might be that old Bob Dylan line, "He not busy being born is busy dying."