"Game of Thrones": An epic with a different ring 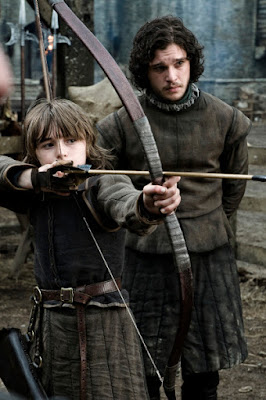 Based on George R.R. Martin’s “A Song of Ice and Fire” novels, the 10-episode saga is a high-stakes move for HBO — an expensive leap into spectacular fantasy for a network whose reputation was built on nuanced, character-driven dramas geared toward adults. The show’s stars merge actorly skill with genre-movie magnetism: Sean Bean is best known as Boromir in Peter Jackson’s “Lord of the Rings” trilogy, Lena Headey starred as Queen Gorgo in “300,” and indie movie veteran Peter Dinklage played Trumpkin in “Chronicles of Narnia: Prince Caspian.”

“Thrones” has been in development since 2006. That’s when friends David Benioff and Dan Weissdecided they wanted to bring to life Martin’s magnum opus about bloody power struggles, dark mystical forces, and children grappling with the sins of their forefathers, all set in a gritty yet vaguely medieval fictional kingdom.

Benioff and Weiss have known each other for decades, and their meet-cute story is pretty unusual for hot Hollywood show runners: The Americans befriended each other while getting master’s degrees in Irish literature at Dublin’s Trinity College.

“Dan was studying Joyce, and I was studying Beckett,” Benioff says with a slight grin. The pair are sitting in a Pasadena hotel, both looking rakishly groomed, with 5 o’clock shadows in force midday.
Having studied two of 20th century modernism’s towering geniuses and later published literary fiction themselves (Benioff wrote several novels, including “The 25th Hour” and “City of Thieves,” while Weiss penned “Lucky Wander Boy”), it might seem strange that they were drawn to Tolkien-esque fantasy.

But for all their education and high-end novels, Weiss and Benioff quickly point out that they’re not just literary geeks: They are also Dungeons & Dragons geeks. “We were both dungeon masters,” says Weiss, whose novel “Lucky Wander Boy” is steeped in video game culture. In fact, the huge popularity of Martin-style fiction seems to go hand in hand with the immersive, drawn-out and escapist entertainment of video gaming.

The duo’s earliest attempt at collaboration — a horror script called “The Headmaster” — went nowhere. But Benioff got a boost in 2000, when Tobey Maguire took a liking to “The 25th Hour” and enabled Benioff to write a screenplay for the Spike Lee movie of his novel. This launched his career as an in-demand writer on movies like “Troy,” “The Kite Runner” and “X-Men Origins: Wolverine.”

In the meantime, Benioff married actress Amanda Peet, completing the aura of Hollywood fairy tale. And then “Game of Thrones” landed on Benioff’s doorstep. Literally. Martin’s agent sent him a hefty package of the books, several of which run more than 1,000 pages. Initially the cheesy fantasy covers repelled Benioff, but after he started reading, he was hooked. “At some point I e-mailed Dan and said, maybe I’ve lost my mind, but this is more fun than anything I’ve read in years and years.”

Dan felt similarly exhilarated. “You almost literally disappear into those worlds, and I hadn’t done that since I was 12 or 13 years old. It’s the kind of experience that’s very hard to have as an adult reader. … A crack-like propulsion to get to the next chapter.”

The duo decided that cramming Martin’s complex saga into a two-hour, PG-13 film would be “an act of mutilation” and wondered if Martin might turn down the payday of a “LOTR”-style movie franchise in favor of a cable TV series.

Martin recalls meeting them at a West Hollywood restaurant for lunch: “They were very enthused, they said all the right things. They didn’t even ask, ‘Does it have to medieval, can it be contemporary?’ ”

The 62-year-old Martin — who, with his hulking frame and his long white locks and beard, could be a character in his own saga — had spent a decade working in TV (“Twilight Zone,” Ron Koslow’s live-action “Beauty and the Beast”) and was fed up with scaling down his vision for the screen. “With my first drafts, they’d always say, ‘It’s great, but it’s too long, it’s got too many characters…. Ultimately I’d come up with a shootable script, but I always liked my first drafts with the huge, juicy stuff in it.”

Benioff tries to keep his vision for the series — and Martin fans’ expectations — in perspective.
“There are certain things we are never going to be able to do the way Peter Jackson could with ‘Lord of the Rings,’” he says. “On the other hand, we have a lot more time to spend with our characters. And at this point in my life as a 40-year-old man, I am much more excited by George’s stories than I am by ‘Lord of the Rings.’”

“Because Frodo never gets to go to a brothel,” Weiss pipes up impishly, as Peter Dinklage’sfabulously saucy character, Tyrion, so often does.

“Game of Thrones” is much more raw and graphic than most fantasy of “The Lord of the Rings”-”Harry Potter” kind. It offers beheadings and bare breasts, as befits the show’s home on HBO. “The [movie] studio conception of fantasy — and the more you edge toward high fantasy the more this becomes true — is that who would be interested in what is limited to 13- to 15-year-old boys?” Weiss says. “But frankly, a 13-year-old probably should not be reading Martin’s books.”

Having a pre-existing narrative to work from is naturally a huge advantage to the show runners. Unlike the creators of a TV show like “Lost,” they don’t have to make up plots as they go along. “Somebody very, very smart has been thinking about [‘Thrones’] 24 hours a day for the past 20 years,” Weiss says. “It gives you such a head start in terms of structure.”

“Thrones” arrives amid a boom in historical and pseudo-historical cable dramas, including Starz’s “Camelot” and “Spartacus” and Showtime’s forthcoming “The Borgias” and recently concluded “Tudors.” Although Martin has done much historical research, “Thrones” is not shackled to any specific reality. According to Benioff, “It’s built on a vaguely Western medieval skeleton, but he’s pulling from the Mongols, native Americans, India, all these elements get woven together into this new tapestry that feels very organic and real but also feels fresh.”

Because it is a work of pure imagination, they can throw in a dragon here, a sword-wielding heroine there; they can even invent a new language. And so they did — hiring linguist David J. Peterson to create a Dothraki dialect spoken by the barbarian tribe that beautiful would-be heir-to-throne Daenerys Targaryen (Emilia Clarke) marries into.

It’s a full-on geek move that should stand them in excellent stead at Comic-Con International, though neither has learned Dothraki yet. Weiss quips, “It’s on my to-do list. I’ve been told Klingon was hard to learn, so we asked that it be easier to learn than Klingon.”

This lapse could be forgiven, considering that the duo spent most of last year on location. (Weiss’ wife gave birth while he was shooting in Northern Ireland, while the Benioffs had their second child during postproduction.) Over the last half decade, they have juggled other projects, like the “Halo” movie that Weiss was attached to for a while and the Kurt Cobain film that Benioff is scripting. Of the latter, Benioff says he’s handed in what he hopes is the final draft of the movie, to be directed by Oren Moverman (“The Messenger”).

But Benioff and Weiss are committed to riding “Thrones” as far as they can, and neither foresee having time to return to writing fiction soon. Did their years as Irish literature scholars go to waste?

Benioff pauses, his mop of curls shaking slightly. “One of the experiences we were studying in Ireland was really close reading,” he says. “Paying so much attention to the text and trying to extract meanings from it. Obviously George’s books are very different from Beckett’s. But he is creating these worlds that are entirely unlike anything I had read before … and we want to do it justice.”